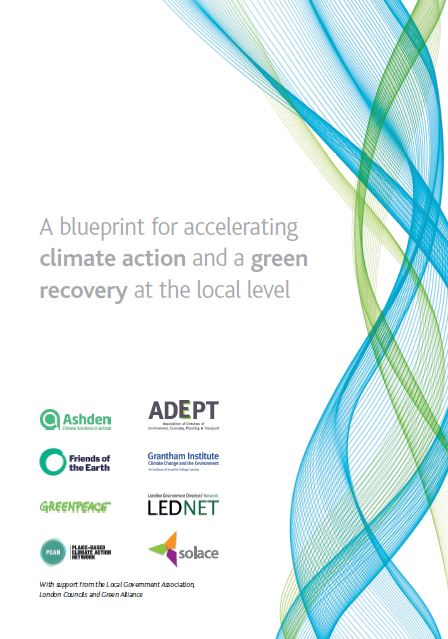 The document was put together by a new coalition of local government, environmental and research organisations, comprising ADEPT, Ashden, Friends of the Earth, the Grantham Institute at Imperial College, Greenpeace UK, the London Environment Directors’ Network (LEDNet), the Place-Based Climate Action Network at LSE and Solace.

Mike Childs, Head of Science, Policy and Research at Friends of the Earth talks about how the document was created and some of the challenges involved.

I never thought I looked scary. I’m five foot eight, slim, balding, and soon won’t even be able to call myself middle-aged. ‘Friends of the Earth’ is about as cuddly as you can get and not easily confused with the Revolutionary Communist Party. So, I found it slightly bemusing and somewhat amusing that there was a nervousness from some local authority groupings about working together. Personally, I blame the insidious influence of social media which polarises and amplifies difference, as well as separates us all into our separate bubbles.

I’ve always been of the viewpoint that we’re all in this together and if we want to solve the ginormous environmental problems we have, we surely have to put aside our differences and collectively put our shoulders to the wheel. Happily, we are doing this now, although it’s taken a while.

The journey to friendship

I was delighted when in summer 2019 LEDNet invited Friends of the Earth to present our work to a meeting of Environment Directors. We were invited because we’d recently published a briefing on 33 Actions Local Authorities Can Take on Climate Change.

The briefing was produced to help local campaigners know what their councils could do, following the passing of climate emergency motions. The briefing was also at pains to point out that local people should not expect miracles from councils, given 10 years of cuts and a paucity of powers in some areas.  The fact that so many council officers and councillors found the briefing useful was an unexpected bonus, although in hindsight we should have expected the interest given many were themselves scrambling to find out what was possible.

Anyway, at the LEDnet meeting my colleague Aaron and I first suggested that green groups and councils should work together to identify and push for the powers and resources needed. There was a guarded but positive response, including from Hannah Bartram who was also presenting at the event.

The next move was from ADEPT, with an invitation to me to join its Advisory Group, which also included the Local Government Association. More face to face meetings led to more trust, including through chats over coffee (Nigel Riglar and I had a good chat about heat pumps as we’d both acquired them and were enjoying getting to grips with them, as boys are wont to do with new toys).

Finally, following an opportunity to speak at an LGA event, we managed to get a great bunch of people around a table from civil society groups (Ashden, Greenpeace and Green Alliance joined us), and local authority organisations (ADEPT, LGA, London Councils, LEDNET, UK100). The meeting was hosted by the LGA in their grand offices near Parliament.

At it we agreed a way forwards for identifying policy recommendations and prioritising these.

The ‘Blueprint for accelerating climate action and a green recovery at the local level’ was published on June 22nd 2020. It is a great document and will form a great basis for building support for councils to get the powers and resources needed. But producing it has not been without challenge.

Reaching out to councils to fully understand the barriers and get policy ideas was time-consuming but essential. But then how on earth do you rationalise so many great ideas? Doing so was tough, and although I think collectively, we’ve done a great job we will have undoubtedly lost some gems along the way (for which, apologies).

Decision-making for local authorities is a different world than for environment groups. Most local authority organisations had to check back with numerous others in their organisations, and at the same time be acutely aware that their groups represented councils with a diversity of political affiliations. That necessarily led to lots of drafting, redrafting, and tweaking. The emergence of Covid-19 also necessitated changes and reduced the capacity of some participants. Without huge efforts from particularly my colleague Sandra Bell and some key partners we would have still been a long way from finalising the document.

Building pressure for change together

But we have got the ‘Blueprint…’ now. Not every organisation was able to sign-on at the launch, but in time I’m confident most will because it is good evidence-based work, respectful of difference, and doesn’t pretend to be the final word. Testament to the quality is the fact that SOLACE, PCAN, and the Grantham Institute for Climate Change and the Environment asked to support it once they saw the document.

The Blueprint is the foundation for working together to get the powers and resources councils need. If councils don’t get these then we fail on climate change, and Friends of the Earth’s mission fails. I think councils need all they help they can get to secure these resources. I’m just not convinced that rationale argument alone will secure what’s needed.

There is a climate and ecological emergency. That is a scientific fact (although I understand those that don’t warm to the word ‘emergency’). We’ve got to get out of our bubbles and work together. That will include understanding and tolerance of the different ways, experiences, and viewpoints that different people and organisations work. None of us are scary really. We’re all humans, and most of us care about the future of our kids and the planet. Let’s put differences aside and amplify our similarities.